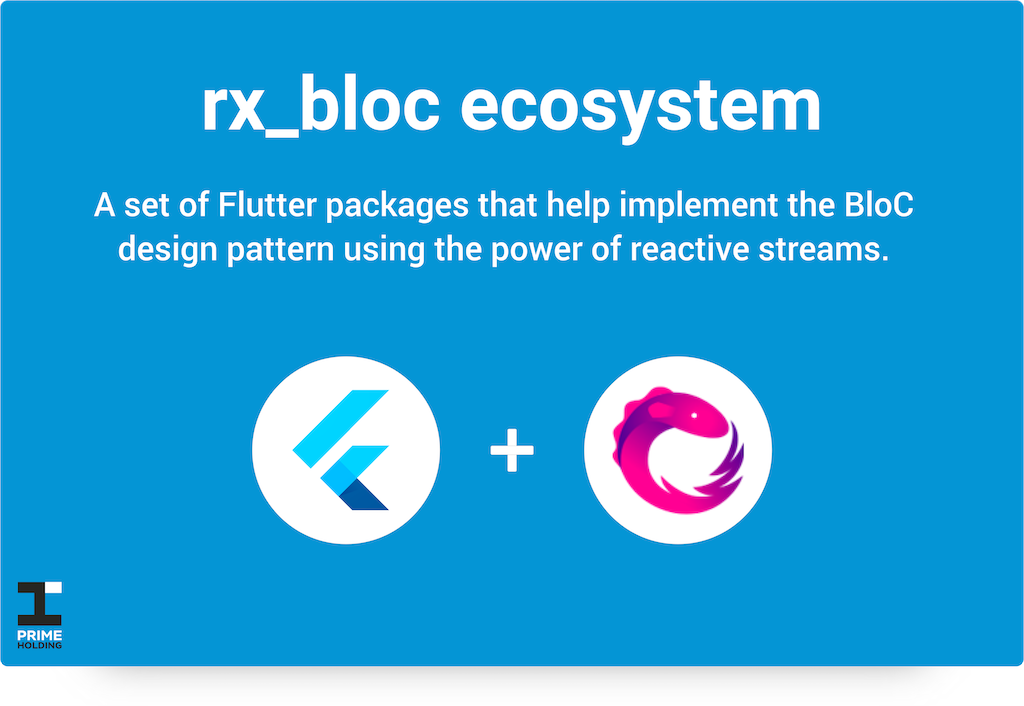 Along with the rx_bloc the following set of packages will help you during the product development.

If you are working on a complex project you might be challenged to build a highly interactive UI or a heavy business logic in a combination with the consumption of various data sources such as REST APIs, Web Socket, Secured Storage, Shared Preferences, etc. To achieve this, you might need a sophisticated architecture that facilitates your work during product development.

By definition, the BloC layer should contain only the business logic of your app. This means that it should be fully decoupled from the UI layer and should be loosely coupled with the data layer through Dependency Injection. The UI layer can send events to the BloC layer and can listen for state changes.

As you can see below, all events are just pure methods declared in one abstract class (CounterBlocEvents).

This way, we can push events to the BloC by simply invoking those methods from the UI layer as follows:

The same way as with the events, now you can see that we have declarations for multiple states grouped in one abstract class (CounterBlocStates). Depending on your goals, you can either have just one stream with all needed data or you can split it into individual streams. In the latter case, you can apply the Single-responsibility principle or any performance optimizations.

You can create the contracts along with the BloC class by yourself, but this seems to be a tedious task, isn't it? It's recommended using the RxBloC Plugin for Android Studio that helps effectively creating reactive BloCs.

The plugin creates just the initial state of the BloC. For all further updates, you will need a tool, which will be updating the generated file (${name}_bloc.rxb.g.dart) based on your needs. Here is where the rx_bloc_generator package helps, as automatically writes all the boring boilerplate code so you can focus on your business logic instead. You just need to add it to your pubspec.yaml file as follows:

Once added to the pubspec.yaml, run the flutter command for getting the newly added dependencies flutter pub get, and then just start the generator by execuing this command flutter packages pub run build_runner watch --delete-conflicting-outputs.

As you can see, by extending $CounterBloc, we must implement Stream<int> _mapToCountState() , which is the method responsible for the events-to-state business logic. Furthermore, we have _$incrementEvent and _$decrementEvent, which are the subjects where the events will flow when increment() and decrement() methods are invoked from the UI Layer. In the code above we declare that as soon as the user taps on the increment or decrement button, an API call will be executed. Since both _$incrementEvent and _$decrementEvent are grouped in one stream by the merge operator, the result of their API calls allows us to register our BloC as a state handler. For more information what is State Handler and how it works, look at this article. We then extract only the “success” result and finally put an initial value of 0.

Accessing the BloC from the widget tree #

First, make sure you have added flutter_rx_bloc to your pubspec.yaml file and after exexuting flutter pub get you will have access to the following widget binders.

RxBlocBuilder is a Flutter widget that requires a RxBloc, a builder, and a state function. RxBlocBuilder handles building the widget in response to new states. RxBlocBuilder is very similar to StreamBuilder but has a more simple API to reduce the amount of boilerplate code needed.

Packages that depend on rx_bloc

Packages that depend on rx_bloc