A screenshot image with overlaid status bar placed in a device frame.

For an example of images generated with Screenshots on a live app in both stores see:

See a demo of Screenshots in action: 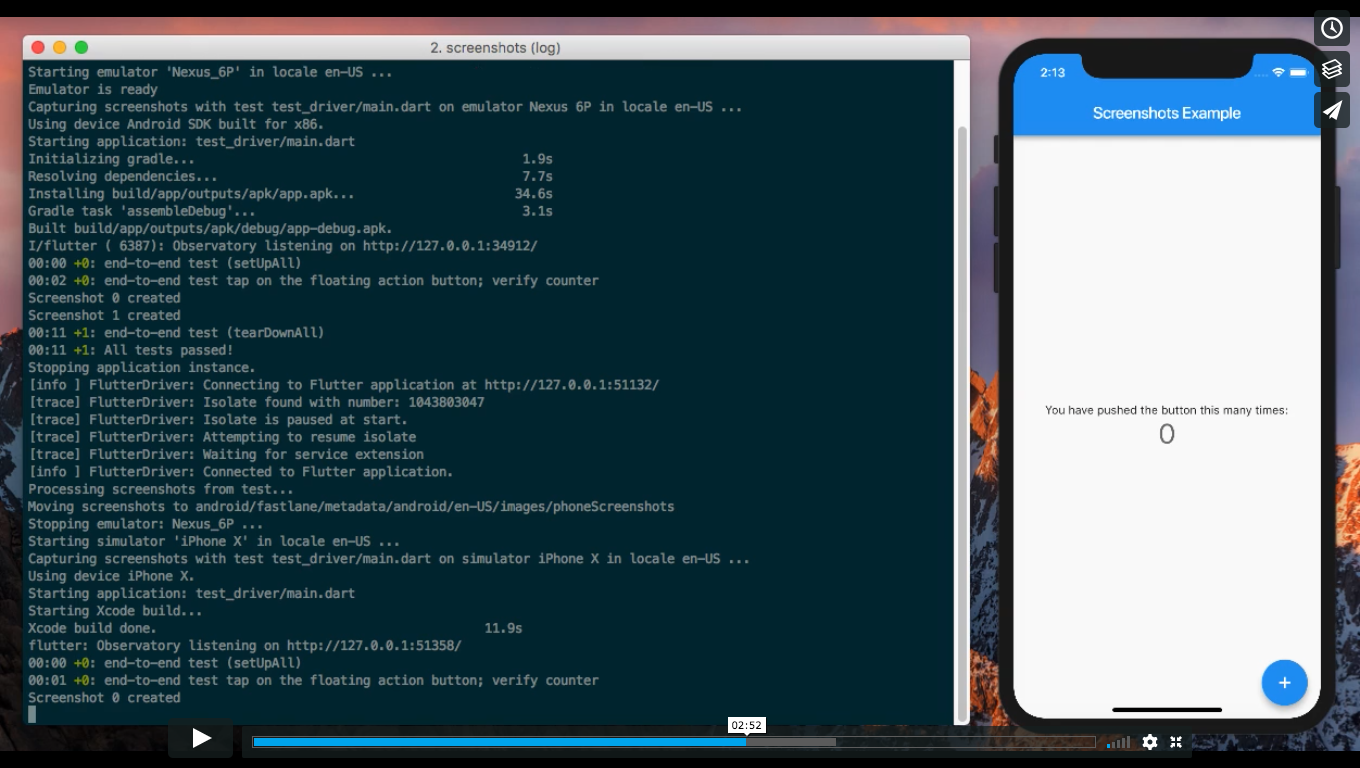 For introduction to Screenshots see https://medium.com/@nocnoc/automated-screenshots-for-flutter-f78be70cd5fd.

Screenshots is a standalone command line utility and package for capturing screenshot images for Flutter.

Screenshots will start the required android emulators and iOS simulators (or find attached devices), run your screen capture tests on each emulator/simulator (or device), process the images, and drop them off to Fastlane for delivery to both stores.

It is inspired by three tools from Fastlane:

Since Flutter integration testing is designed to work transparently across iOS and Android, capturing images using Screenshots is easy.

Note: ImageMagick v7 or later is recommended on windows.

If pub is not found, add to PATH using:

Note: if running on Windows or Linux, can only run android devices/emulators. To also run on macOS use a CI that supports macOS.

Or, if using a config file other than the default 'screenshots.yaml':

Modifying your tests for Screenshots #

A special function is provided in the Screenshots package that is called by the test each time you want to capture a screenshot. Screenshots will then process the images appropriately during a Screenshots run.

To capture screenshots in your tests:

Note: make sure your screenshot names are unique across all your tests.

Note: to turn off the debug banner on your screens, in your integration test's main(), call:

Modifying tests based on screenshots environment #

In some cases it is useful to know what device, device type, screen size, screen orientation and locale you are currently testing with. To obtain this information in your test use:

Screenshots uses a configuration file to configure a run.
The default config filename is screenshots.yaml:

Individual devices can be configured in screenshots.yaml by specifying per device parameters.

Screenshots can be used to monitor any unexpected changes to the UI by comparing the new screenshots to previously recorded screenshots. Any differences will be highlighted in a 'diff' image for review.

To use this feature:

To generate screenshots for local use, such as generating reports of changes to UI over time, etc... use 'archive' mode.

To enable this mode:

Since Screenshots is intended to be used with Fastlane, after Screenshots completes, the images can be found in your project at:

Images are in a format suitable for upload via deliver and supply.

Tip: One way to use Screenshots with Fastlane is to call Screenshots before calling Fastlane (or optionally call from Fastlane). Fastlane (for either iOS or Android) will then find the images in the appropriate place.

(For a live demo of using Fastlane to upload screenshot images to both store consoles, see demo of Fledge at https://github.com/mmcc007/fledge#demo)

To change the devices to run your tests on, just change the list of devices in screenshots.yaml.

Make sure each device you select has a supported screen and a corresponding attached device or installed emulator/simulator. To bypass the supported screen requirement use frame: false for each related device in your screenshots.yaml.

For each selected device:

Screenshots will check your configuration before running for any errors and provide a guide on how to resolve.

If your device does not have a screen in screens.yaml please create an issue to request a new screen.

If you want to submit a new screen please see related README.

Note: the Screenshots version should be the same for both the command line and in your pubspec.yaml.

To check the version of Screenshots currently installed:

Sample run on Travis and Appveyor #

To view Screenshots running with the internationalized example app on macOS and linux in the cloud see:
https://travis-ci.com/mmcc007/screenshots

To view the images generated by Screenshots during a run on travis see:
https://github.com/mmcc007/screenshots/releases/

To view a similar run on windows see:
https://ci.appveyor.com/project/mmcc007/screenshots

To run integration tests on real devices in cloud:
https://github.com/mmcc007/sylph

To automate releases to both stores:
https://github.com/mmcc007/fledge

Your feedback is welcome and is used to guide where development effort is focused. So feel free to create as many issues and pull requests as you want. You should expect a timely and considered response.

Packages that depend on screenshots

Packages that depend on screenshots