Note, the Framework package, mvc_application, uses mvc_pattern at its core.

The package, mvc_application, allows for easier and, dare I say, faster development and better maintenability. No 're-inventing of the wheel' with already built-in capabilities and features. Accommodating and Intergrated features:

The "Kiss" of Flutter Frameworks

In keeping with the "KISS Principle", this is an attempt to offer the MVC design pattern to Flutter in an intrinsic fashion incorporating much of the Flutter framework itself. All in a standalone Flutter Package.

In truth, this all came about only because I wanted a place to put my 'mutable' code (the business logic for the app) without the compiler complaining about it! Placing such code in a StatefulWidget or a StatelessWidget is discouraged of course--only immutable code should be in those objects. Sure, all that code could go into the State object. That's good since you want access to the State object anyway. After all, it's the main player when it comes to 'State Management' in Flutter. However, it makes for rather big and messy State objects!

Now, I had no interest in re-inventing the wheel. I wanted to keep it all Flutter, and so I stopped and looked at Flutter closely to see how to apply some already known design pattern onto it. That's when I saw the State object (its build() function specifically) as 'The View,' and the separate Dart file or files with access to that State object as 'The Controller.'

This package is essentially the result, and it involves just two 'new' classes: StateMVC and ControllerMVC. A StateMVC object is a State object with an explicit life-cycle (Android developers will appreciate that), and a ControllerMVC object can be that separate Dart file with access to the State object (StateMVC in this case). All done with Flutter objects and libraries---no re-inventing here. It looks and tastes like Flutter.

Indeed, it just happens to be named after the 'granddaddy' of design patterns, MVC, but it's actually a bit more like the PAC design pattern. In truth, you could use any other architecture you like with it. By design, you can just use the classes, StateMVC, and ControllerMVC. Heck! You could call objects that extend ControllerMVC, BLoC's for all that matters! Again, all I wanted was some means to bond a State object to separate Dart files containing the 'guts' of the app. I think you'll find it useful.

Let’s demonstrate its usage with the ol’ ‘Counter app’ created every time you start a new Flutter project. In the example below, to utilize the package, three things are changed in the Counter app. The Class, _MyHomePageState, is extended with the Class StateMVC, a ‘Controller’ Class is introduced. It extends the Class, ControllerMVC, and a static instance of that Class is made available to the build() function. Done! (Note, you will find the 'source code' for this example in this package's test folder.)

With that, there's now a separation of ‘the Interface’ and ‘the data’ as intended with the MVC architecture. The build() function serves as 'the View.' It's concerned solely with the ‘look and feel’ of the app’s interface—‘how’ things are displayed. While it is the Controller that determines 'what’ is displayed. The Controller is also concerned with 'how' the app interacts with the user, and so it's involved in the app's event handling. 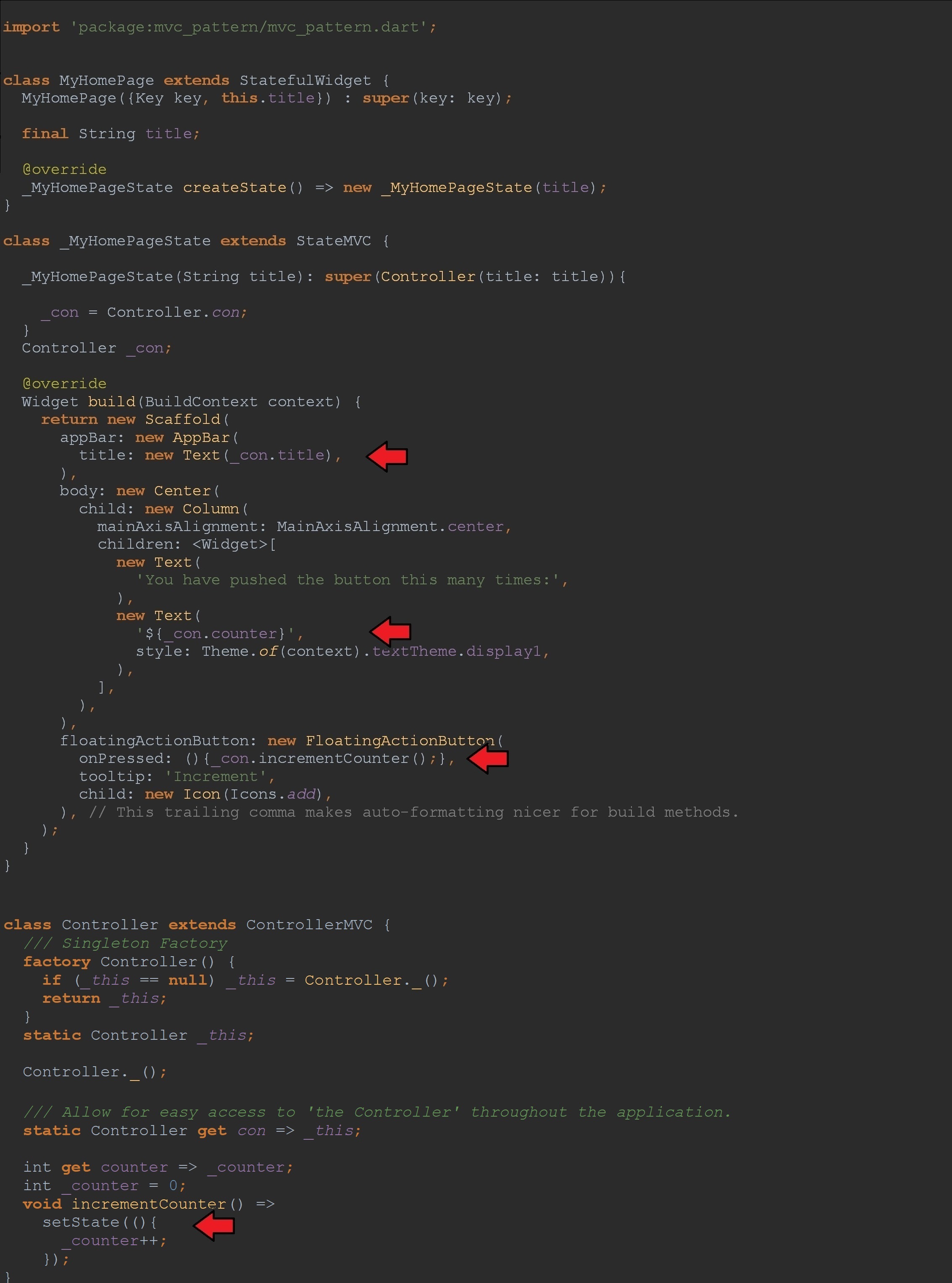 In this arrangement, the Controller is ‘talking back’ to the View by calling the View’s function, setState(), telling it to rebuild the widget tree.

Maybe we don’t want that. Maybe we want the View to be solely concerned with the interface and solely determine when to rebuild the widget tree (if at all). It’s a simple change. 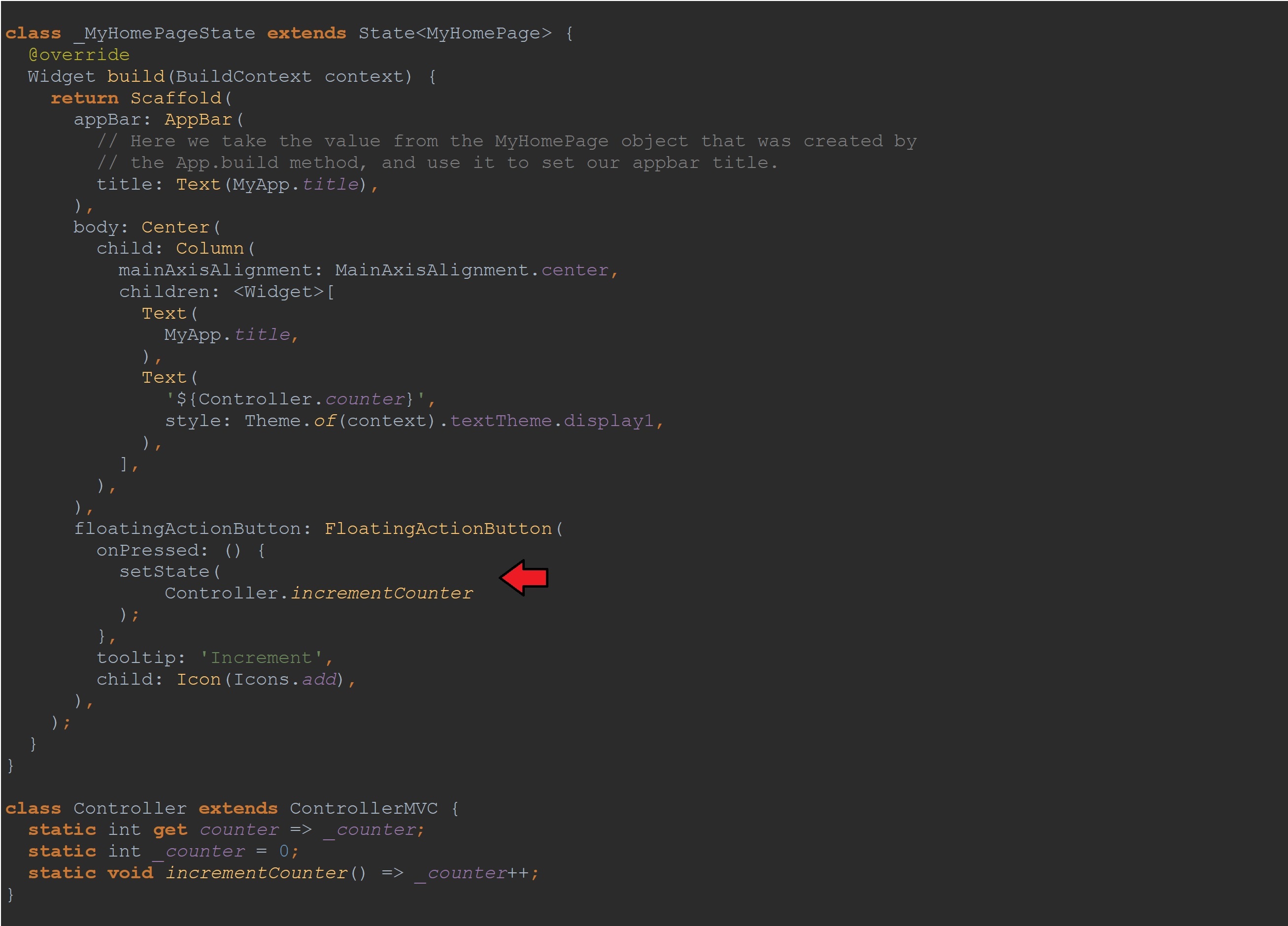 It does separate the ‘roles of responsibility’ a little more, doesn’t it? After all, it is the View that’s concerned with the interface. It would know best when to rebuild, no? Regardless, with this package, such things are left to the developer. Lastly, notice how I created a static String field in the MyApp class called, title. It’s named ‘MyApp’ after all—It should know its own title. 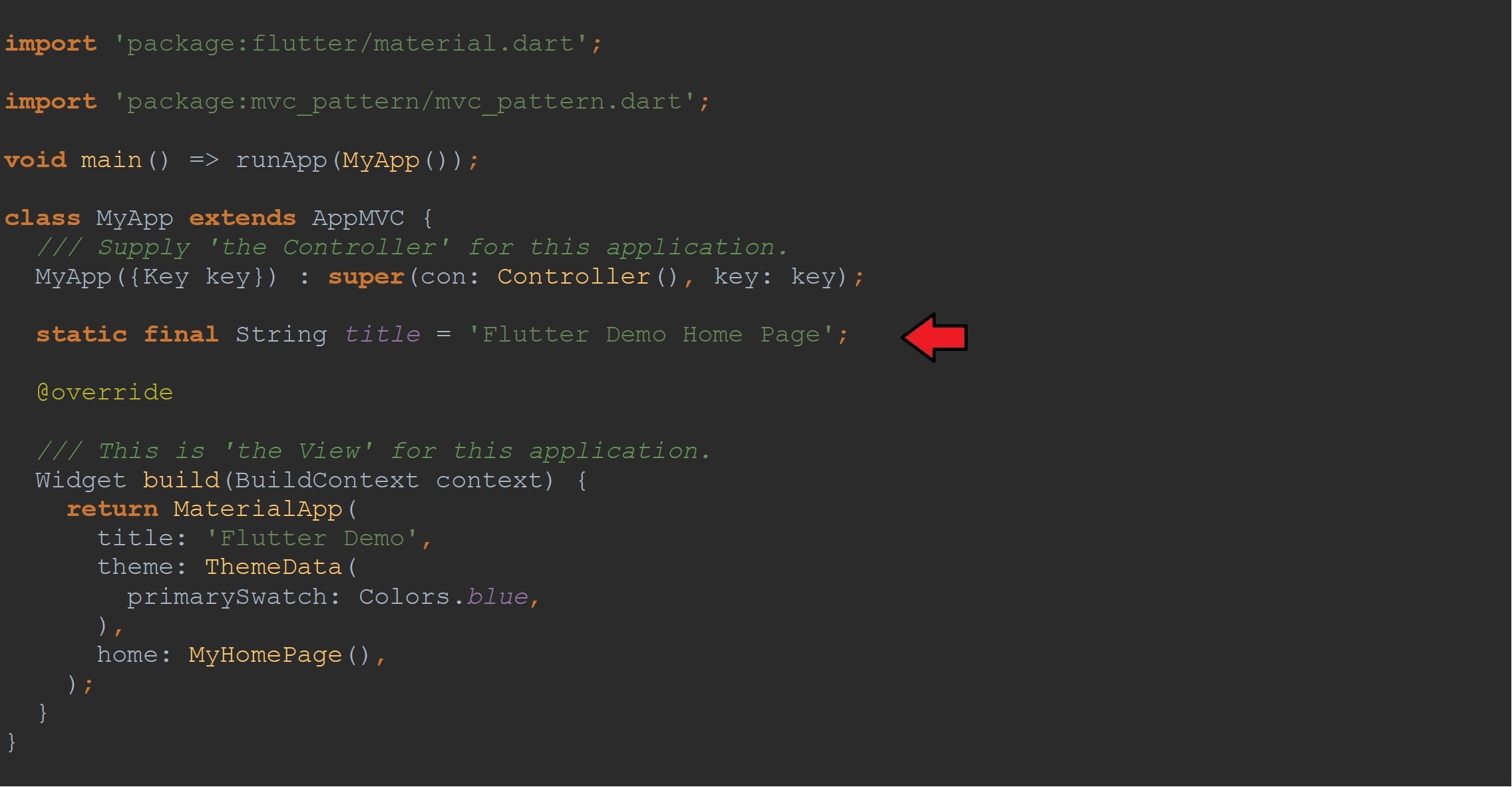 You see in the 'App' class above, that the Controller is instantiated in the parent class. Doing so allows your Controller to now access the many 'events' fired in a typical Flutter app. 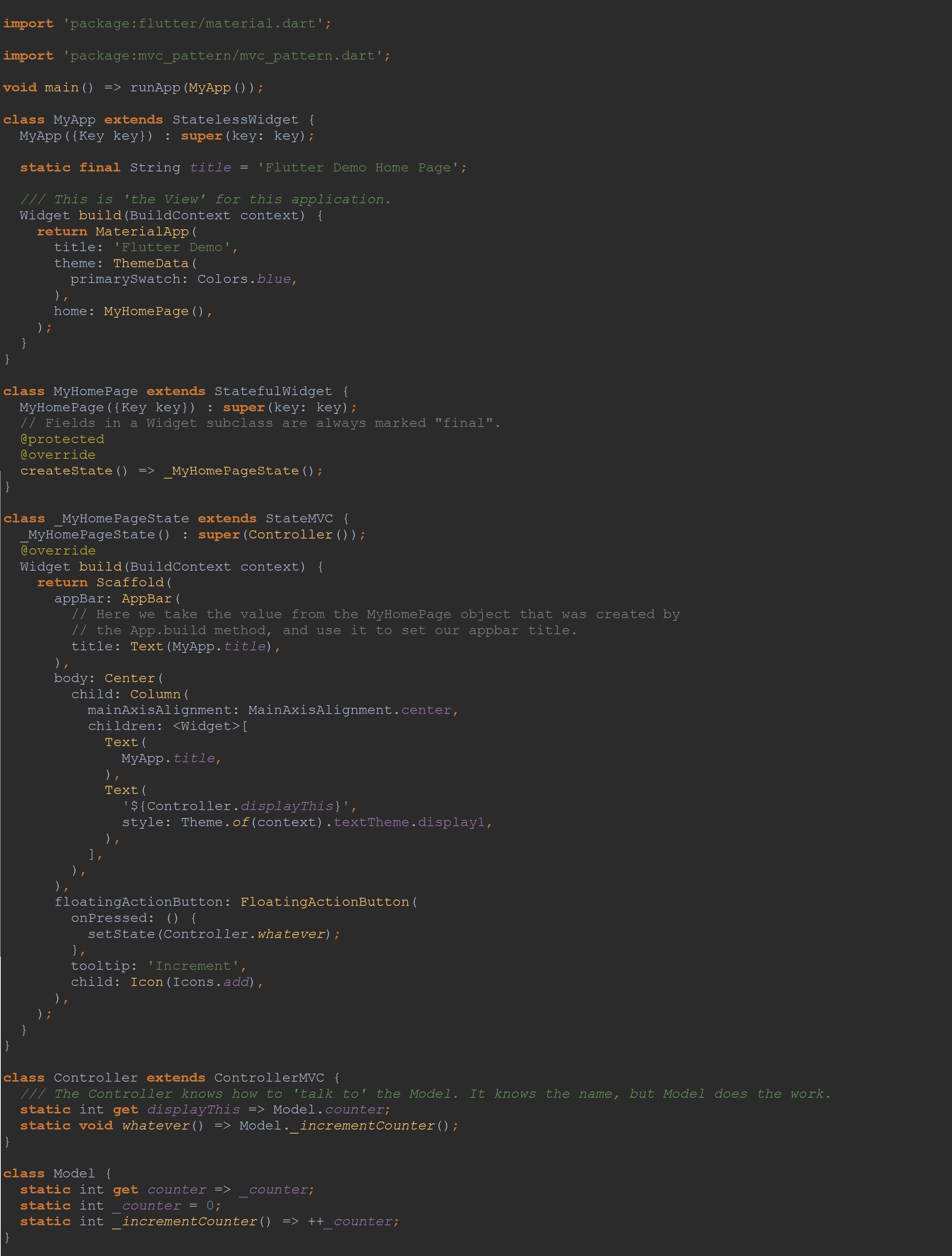 The Model’s API is also a little cleaner with the use of a static members. The View doesn’t even know the Model exists. It doesn’t need to. It still ‘talks to’ the Controller, but it is now the Model that has all the ‘brains.’

Note above, it's a full screenshot of the counter app example, and there's further changes made compared to the previous examples. Note, the State object again extends StateMVC and the 'MyApp' class is returned to StatelessWidget. Allows the State object to address events instead. Here, the Controller is passed to its parent class to 'plug it into' the event handling of a typical Flutter Widget. Finally, note the Controller's property and function names have been changed. This merely demonstrates that there's no 'hard cold rules' about what the API is between the View, the Controller, and the Model. You merely need to be consistent so they can 'talk to' each other. 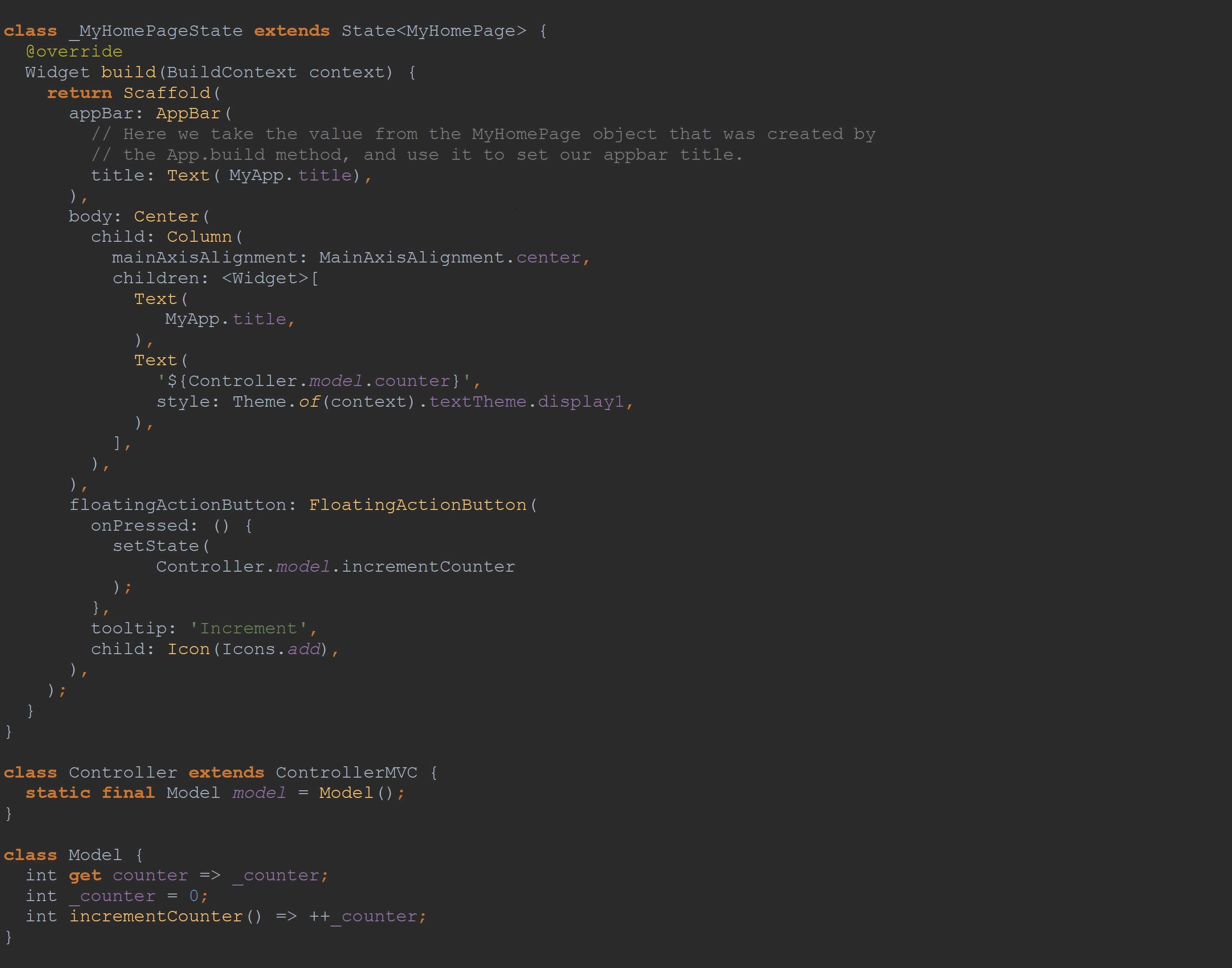 Not particularly pretty. I mean, at this point, you don't even need 'the Controller', but it merely demonstrates the possibilities. With this MVC implementation, you have options, and developers love options.

Below, I've changed it a little bit. The View still has access to the Model, but the Controller is still responsible for any 'event handling' and responds to the user pressing that lone button in the app. 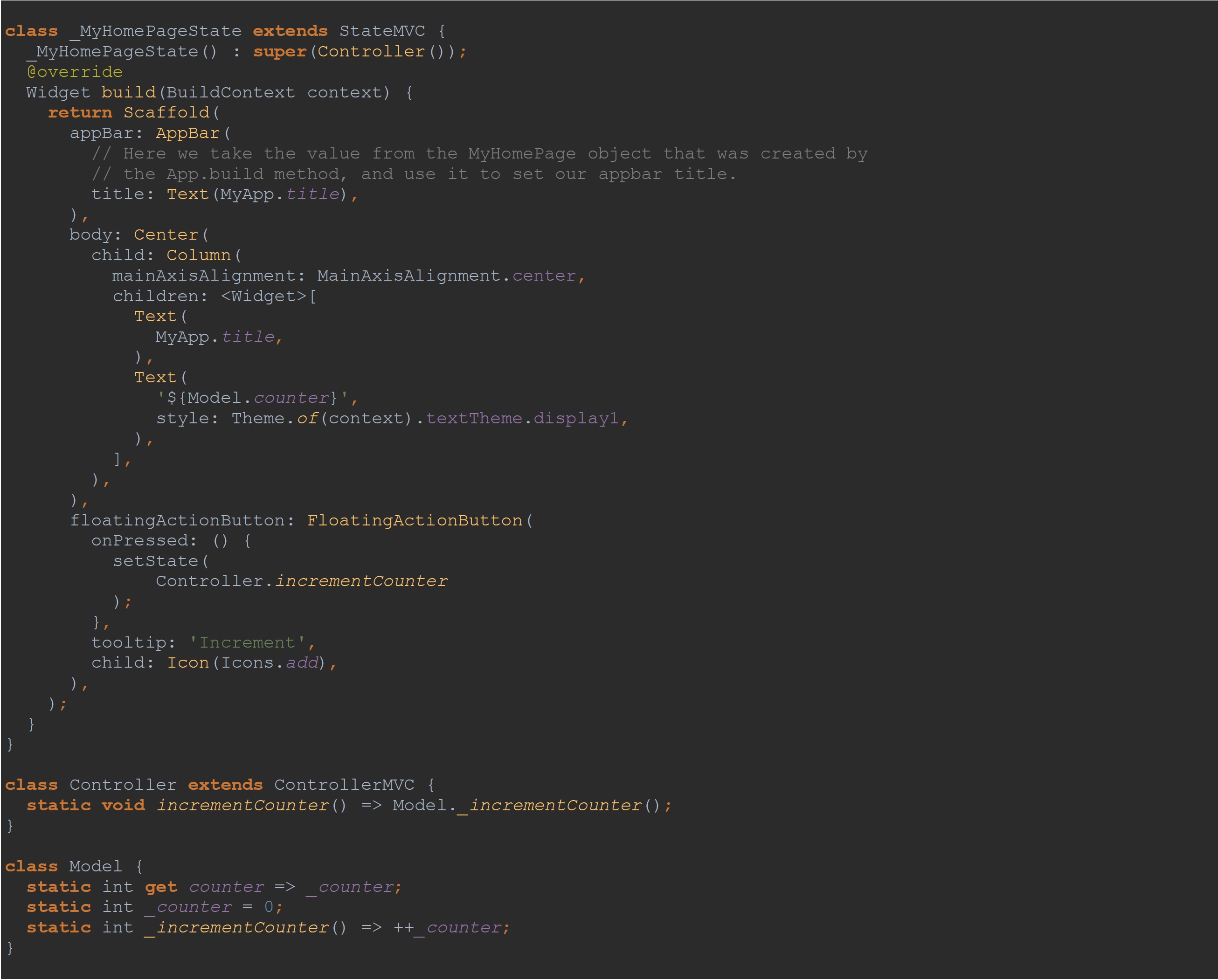 Below is the Counter App you can copy n' paste to quickly try out:

Now you can easily introduce a Model:

Of course, you're free to 'switch out' variations of the Controller over time. In this case, you no longer need to assign a local variable, _con, but instead use a static reference: Controller.incrementCounter;

This is the application offered in the website, Write Your First Flutter App, when you're first learning Flutter. This version has this MVC implementation.

Note how its all made up of static members and turns to Model for all the data.

This Model works with the third-party library, english_words. The rest of the application has no idea. The Model is solely concern with where the 'words' originate from.

Further information on the MVC package can be found in the article, ‘MVC in Flutter’

Packages that depend on mvc_pattern

Packages that depend on mvc_pattern