It's recommended to install the package globally and use as an executable.

You can install the package from the command line:

And follow the instructions (you should add PATH variable on unix systems).

Now you can execute commands with

⚠️ Attention! If you have only Flutter installed and doesn't have separate Dart SDK installed, then you haven't pub command. So when you try to run alex you will see something like:

There are more than one solution for this. You can just install separate Dart SDK if you want.

When entering Cyrillic characters (while saving changelog) they may not be displayed correctly or may not be displayed at all. To avoid this, it is recommended to use the external git bash terminal (C:\Program Files\Git), in the settings of which you must specify encoding (Options -> Text -> Character set -> UTF-8). 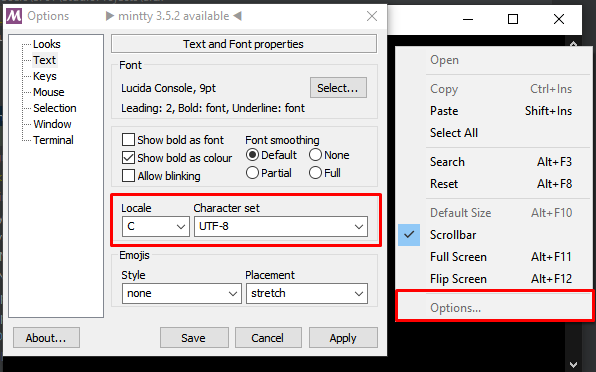 alex is working in the current directory. So if you want to work with a specific project, you should run the command in project's root directory.

To provide more convenient way to work with project, alex can use some configuration. You can define configuration in your project's pubspec.yaml, section alex, or in separate file alex.yaml.

You can see all configuration options and it's default values in the example config /alex.yaml.

More about specified configuration parameters - in modules descriptions in the Commands section.

Work with feature branches and issues.

Also you can run command without issue id:

Then alex will print all current feature branches and ask for issue id in interactive mode.

If you have a problem with interactive mode (for example encoding issues on Window), you can provide changelog line as an argument:

It's important to use double quote (") on Windows, but on macOS or Linux you can also use a single quote (').

It's for working with translations from Google Play.

Also you can export to the Android localization:

And to the iOS localization:

Localization xml files for iOS should start with ios_ prefix.

When you download and unzip translations from Google Play, you need to import them in project's xml files. You can copy it all manually, but it's very inconvenient. So you can use the command import_xml to do it.

Work with pubspec and dependencies.

Update specified dependency. It's useful when you want to update dependency for git.

and input package name. Or define it right in a command:

Run pub get for all projects/packages in folder (recursively). It's useful when you have multiple packages or project and package in single repository.