It has two layers:

WireData also has special implementation for Flutter - WireDataBuilder Widget. This widget makes it possible to reuse business logic in web (with any other UI frameworks like Angular) and in mobile project with Flutter. Take a look at the "example" folder in both repositories (current and wire_flutter) where _shared folder contains reusable code imported in both projects as a dart package (with custom path to package), the folder shared as a separate git branch with git-subrepo 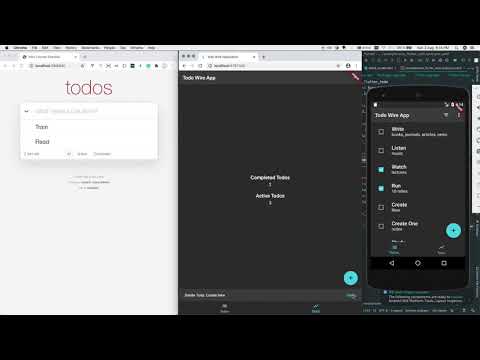 Also ported to (Work In Progress):

Steps from diagram's description above. It's example of counter application (see folder ./example/counter).

Since there is no Model box in this example, the processor (or controller) updates data by itself the steps 4 and 6 are the part of it.

Steps: 2, 7 - View subscribe to data changes and know how to update itself:

Step: 3 - another View translate UI event to the system signal:

Adding wires and WireListeners to the system. In reaction its immediately set new value to data-container layer from function that do decision making Wire.data(CounterDataKeys.COUNT, (oldValue) => newValue).

Steps: 4, 5 - "middleman" who catch all whats happening in the system (in this example it stores counter value to localStorage):

This "middleman" can be considered as a part of a Model.

Key to a good software product is understanding of how things work together, what do what, software design, separation of concerns and responsibilities, SOLID principles. Here is a good saying from Robert C. Martin:

Being in software development over decade now (2020) I have seem many projects built with different tools and platforms, most of them dealt with user interactions and UI layer(s), and I’ve seen, and still see, the same problems everywhere - no strict rules between UI and data, rules are needed to create order, order creates beauty, and beauty survive and thrive. Even if some framework provides these rules and relations between entities they don't have specific tools to force use them, and usually people break them in favor to release feature faster, therefor a software systems could end up in chaos, where business logic mixed with UI and other parts, domain data generate (or resend) from view and coupled with logic of how this data rendered, and other operations that is not related to the view layer (e.g. requests to remote end points). Remember (from Robert C. Martin):

Separation, putting things outside of boundaries, make parts as plugins - that's what I've been thinking about for years, looking at how others work, how things connected, how data propagated through and used in different popular frameworks, in companies custom solutions. And what I realized is that - it all rotated around two concepts:

And they both can be represented as an API - Events API and Data API, both could be just a sets of keys without any obligations - set of strings. This idea leads to the concept of layers - two distribution layers one for communication, events or signals, another one for data. That’s how idea of Wire came to life! This way entities expose two parts:

Component post this information in unique collection of strings - component's Events API and Data API, or it might use general collections shared APIs presented as strings only. Anyway it does not know from where the data come from and who will process actions.

The aim of this library is to decouple business logic or any logic that makes decisions on data processing, decouple it from UI - this allows to have shared code that can be imported to different projects, with completely different UIs, with any entity.

It's about shared code that can be plug-in or loaded at runtime when it's needed.

You find these concepts in every program. Basically it's called - Model-View-Controller - meta-pattern or idea of separating program on functional pieces. Understanding MVC is about understanding how programs should work.

Data structure and the ways how to access data define how an application works and how to apply changes. Therefore data definition is the first step in software development. All starts with data. In MVC, the fact that Model is in the first position emphasize it as well. Models in application play a wider role than just value objects definition, it's also a way of how these objects are stored and retrieved, you can think of it as a data API - create, update, delete and etc. Does it make any decisions on how to modify the data? Probably not, maybe only update related data (e.g. in-memory counter of completed todos). And don't forget that there are two types of models - active and passive, one can notify when changes have occurred (active) and another is a plain storage, file or database (passive) - it has to be monitored by a controller or another agent. Next the example of one of TodoModel's methods:

Wire.data('key') plays a role of active model, it holds WireData instances associated with string keys, WireData is a container with data (accessed from .value property) and it can be monitored for updates by subscribing to it - WireData.subscribe((value) => { ... }). To update the value and notify listeners just set the value: Wire.data('key', value). That's simple. It's up to you to decide from where the value (WireData.value) will be updated either from separate entity, a model by calling its data API (together with physical storing in database or sending to a server), or you can do it from controller afterwards when sub-processes will be ended.

UI also could have its own state - visual state, and it might not need to be stored in persistent storage at all, only temporarily. Example - accordion’s opened tab, or button hover state, tooltips, input highlight and etc. These states might depend on domain's data and are generated in run-time based on some conditions. Yes, view could have logic inside, but it has to be simple branching conditions and only depends on data passed in, not from multiple data sources, if it is then this is a sign of needed refactoring (for example extracting condition into pre-calculated object property - UserVO.canRoleBeChanged). With Wire view consume data from Data Container Layer - Wire.data(value), then view subscribe to updates and re-render itself when change will happen - WireData.subscribe((value) => { ... }).

But not every program has a view, servers might not have UI, and it all depends on the definition of the view. Saying View we mean something that can emit external events about outside world or interaction, and incoming network traffic fit to this definition quite well, and in this case Wire can be a distribution gate for network API calls, just call Wire.send(signal, dto) on network events and every part of internal system can react to it. Wire.send is a Communication Layer - a way to completely separate parts of the application. View sends signals and waits for data to be updated. Other parts of the view can listen for signals as well and update themselves accordingly. Signal is a string type constant and all of them represent Events API of the component or a system.

Decision making - business logic - the rules, the controller. It's a place where data meet events, their data are mixed with other data, compared and distributed to a model for CRUD operations, then view updates.

We believe and promote the idea that's view is 'just' the UI layer, with the real app being the logic and data kept outside the components tree.

from original article Thoughts on React Hooks, Redux, and Separation of Concerns

Based on this belief we recommend to keep all your business logic, all these data processing and decision making logic outside of a view - in controllers, this is the only right place to do that. Signals listeners placed inside controller. You register a signal by adding it to the Communication Layer with Wire.add(scope, signal, listener). Many signals can be connected to the same listener and vice versa. The listener should follow the specification of WireListener and has two params - data payload it distributes and wire identifier (wid - string constant).

In controller you make a decision of how to process input data, do calculation, then data delegated to a model(s), stored or sent to the server, then controller might initiate reaction - send another signal or if data was not updated from model (in Data Container Layer) then controller might update it manually (with Wire.data(key, value)). Application can have multiple controllers each responsible to its particular data processing. You might think of them as reducers from Redux world or commands from PureMVC.

FLUX pattern is a modification of MVC idea, where data flow unidirectional and controllers replaced with so-called "controller-views":

"Views often found at the top of the hierarchy that retrieve data from the stores and pass this data down to their children."

But in general it's all MVC, Wire incorporate these ideas of Flux, but also allows consumers of data additionally react on signals from other parts of the system, basically from anywhere, beside provides a way to manually subscribe to data changes. The basic flow is next:

Having business logic separated from presentation, events distributed in Communication Layer and data accessible from shared layer (Wire.data) it's now possible to consume the data and send signal from UI easily. In Flutter this means that we can leave visual hierarchy, UI rendering and transitions between screens/pages to the Flutter framework, and consume data in places where it's needed, we can do this with special widget - WireDataBuilder<T>({Key key, String dataKey, Builder builder}) which subscribe with a string dataKey to WireData value and its changes, it rebuilds underlying widget you return from builder function when WireData value updated. However if you need only data in place you still can get it directly with Wire.data('key').value. Here is an example from Todo application: Here is Wire in Flutter

Definition of listener to a signal in Wire.add(scope, signal, listener) To get signal use Wire.get(wid:wid).single

It is a data container that holds dynamic value. WireData can be subscribed (and unsubscribed). It is associated with string key and retrieved from in-memory map with Wire.data(key). WireData can't be null and Wire.data(key) will always return WireData instance, but its initial value can be null (if first call does not have value, e.g.Wire.data(key, null)), to check this initial null value WireData has special property isSet, which is false until not null value won't be set for the first time. To remove value from Data Container Layer use method remove() - it emits null value before remove subscribers and WireData instance, use isSet property to to distinguish between newly created (false) and removed.

Class that extends WireMiddleware's methods can be added to Wire.middleware(middleware)