The supported SVG profile includes the parts of SVG Tiny 1.2 that are applicable to static images, plus a healthy subset of SVG 1.1. In-line Cascading style sheets (CSS) are supported, via the <style> tag. In addition to SVG, Android Vector Drawable files are supported. A widget for displaying these scalable images is provided.

The library is published to pub.dev, where you can also find the dartdocs. It's used for the jupiter icon in JRPN, and for the cards in Jovial Aisleriot. 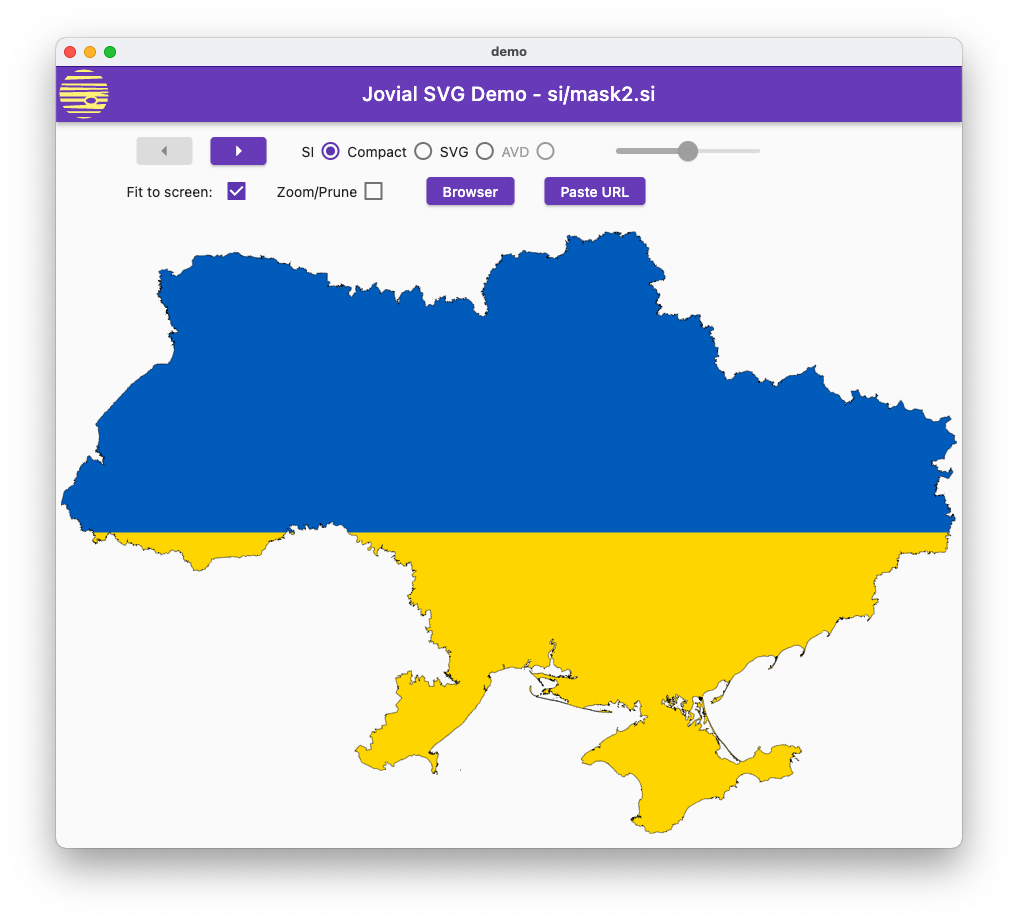 It's generally preferable to pre-load an instance of ScalableImage, as discussed below.

Sample applicatons are available. The cache sample might be of interest if ScalableImageWidget is used in a widget that is frequently rebuilt (e.g. because it's used in an animation), or if SVGs are to be loaded over the network. There's also an example of extending jovial_svg with a persistent cache.

Parsing an XML file isn't terribly efficient, and it's generally better to do any loading before building a widget tree. This package includes tools to make its use more efficient in both of these aspects.

The svg_to_si program compiles an SVG file into a much more efficient binary representation, suitable for inclusion in an asset bundle. The avd_to_si program converts an Android Vector Drawable file. Converting to an si file speeds runtime loading by an order of magnitude. You can activate the conversion programs with dart pub global activate jovial_svg, or you can run them from your project directory like this:

For optimal performance, you can pre-load a ScalableImage using various static methods defined on the class. You can also proactively load and decode any image assets contained within the ScalableImage. Once ready, your ScalableImage can be used synchronously with ScalableImageWidget, or directly with a Flutter CustomPaint.

To try out the library, see the demo program. It's mostly intended to be run on the desktop, though it will run fine on other platforms. It lets you cycle through a series of test images, including several taken from an open-source card game (Aisleriot). The demo also lets you paste the URL to an SVG asset into the program; it then loads and renders it. 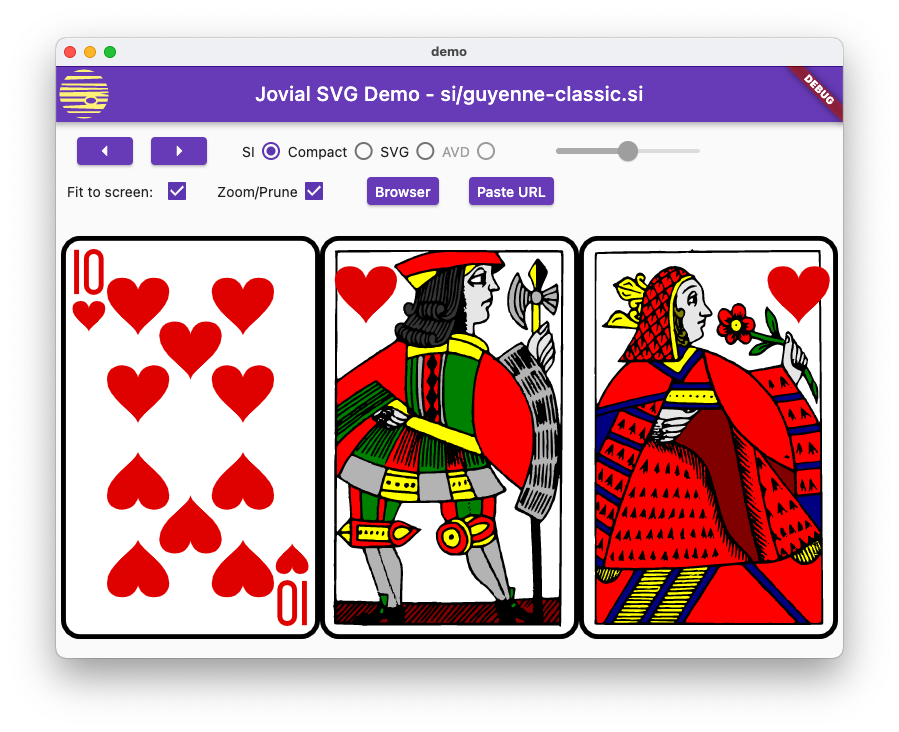 Most features of SVG 1.1 that are applicable to static SVG documents are supported, including CSS via the <style> tag.

This library was originally written because existing alternatives didn't correctly handle many aspects of SVG. This made it impossible to re-purpose existing SVG graphical assets, e.g. from other open-source programs. Additionally, runtime performance wasn't so good, perhaps due to the overhead associated with parsing XML.

It must be said that the SVG specifications are rather large. SVG 2 notably added a rich set of features that aren't needed for a graphics interchange format. SVG in browsers also supports scripting and animation. Further, this family of specifications has always been somewhat squishy about conformance and profiling -- there's a whole set of resources devoted to tracking which browsers support which features, and that's with fairly large and well-funded teams developing browsers over decades.

However, there are a large number of (quite beautiful!) SVG assets for static images that generally stay within the bounds of SVG 1.1. SVG Tiny 1.2 is a reasonable collection of the most important parts of SVG 1.1 -- it was intended as such (though it has since been essentially abandoned). One of the challenges in developing this kind of library is deciding which features are essential, and which are gold-plating that are not in wide use. For this library, informed guesses were necessary at some points; SVG Tiny provided a solid starting point that a group of experts put considerable thought behind.

If you come across an SVG asset that falls within the scope of this library, but that doesn't render, please try to narrow down what support would be needed in the library, and submit an image that correctly uses that feature in any bug report. Contributions can be considered too -- and the binary format has plenty of room for extensibility.

jovial_svg
This library offers a static ScalableImage that can be loaded from: