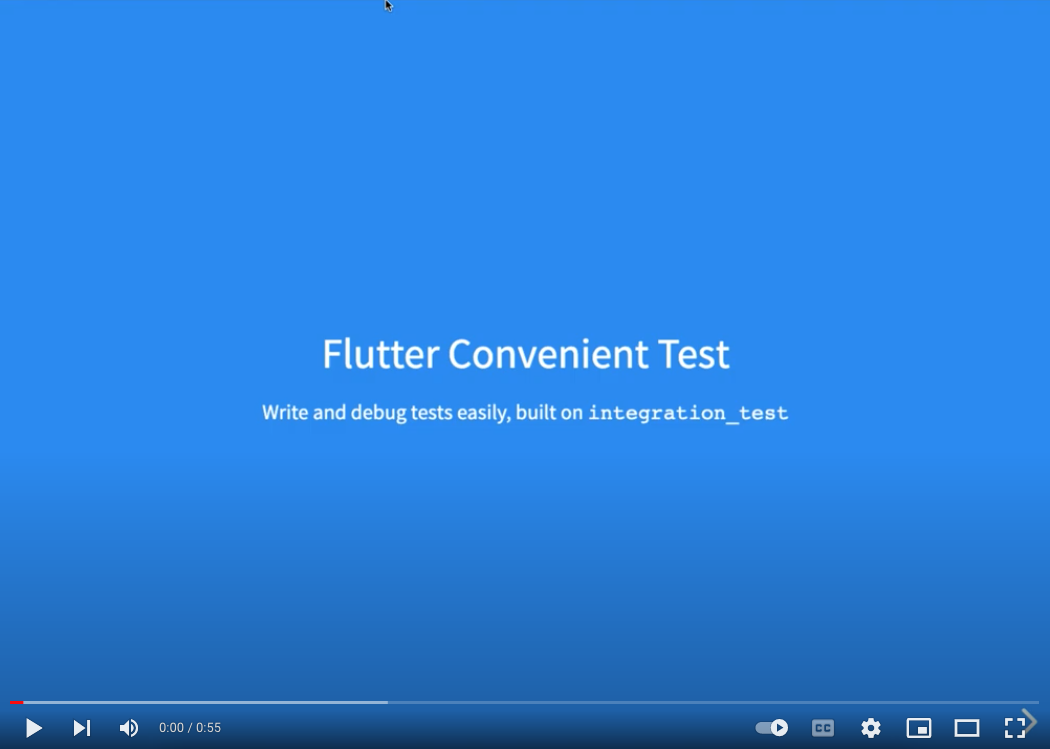 Though used in production environment in my own 200kloc Flutter app, this package - especially the doc - is surely not yet perfect. Just create an issue and I usually reply quite quickly.

See actions/taps/assertions taken in the tests, with friendly descriptions (in the left panel)

Tap an action to see its screenshots

P.S. Use mouse wheels and dragging to zoom and pan the screenshots.

Edit code, save, run - within seconds

Watch what has happened in full detail (in right panel)

P.S. Highlighted action is in sync with the playing video. Tap action to seek video.

One test will no longer destroy environment of other tests - now you can run run each with full isolation.

This is especially helpful in big projects (such as mine), when an end-to-end setup is not easy to tear down, and one failed test can cause all subsequent tests to have damaged execution environment and thus fail.

Technical details: If this mode is enabled, a hot restart will be performed after each attempt of each test.

If you want to migrate to this package from raw integration_test, have a look at Getting Started section below.

Flaky is flaky, and we are aware of it. It is neither failed nor success, so you will not be alarmed by false positives, and not completely ignore it.

More in quickstart and tutorials below.

This tool can be run without GUI and only produce log data and exit code, making it suitable to be run in a CI. If you want to examine the details with GUI, just open the generated artifact in the GUI using Load Report button.

Tap "Run" icon button after each test or group to re-run only that test/group, without running anything else. All within seconds - no need to recompile like what the original test package did.

Useful when replaying videos and screenshots

Tap "Raw Logs" in the right panel to see raw outputs of a test.

Following is a brief description of the functionalities of each button in the header panel.

Following are about the toggles:

There are precompiled binaries for each commit, at the "artifacts" section in the CI page. For example, download manager_macos artifact, unzip it, and open it.

Currently only MacOS has CI for this, and I am willing to accept a PR for Windows or Linux.

packages/convenient_test_manager is nothing but a normal Flutter Windows/MacOS/Linux app, so run it following the Flutter official doc.

Surely, it can also be run via flutter profile mode to speed up. Or use flutter build and the standard approaches to generate a release version binary and use it.

Thanks for testing frameworks in JavaScript, especially Cypress, for giving inspirations!